The key combination for stable, healthy, long lasting energy for work, sports performance, and normal, as well as challenging daily activities is to not be hungry, always a distraction, and to have plenty of energy when needed.

This twofold need, energy and satiety, is accomplished along with the heart health functions of CardioBar® , by using whole food energy sources, that are low glycemic, and which are contained in a fiber/protein matrix, creating a slower release into the body once digested and metabolized.

Two key facts on metabolism are addressed to achieve these benefits:

1. The “Appestat” is a area in the ventromedial hypothalamus (VMH), and works in conjunction with other areas of the brain and digestive system. The specific function related to appetite that VMH measures is accomplished by a group of cells in that region specifically dedicated to measuring circulating blood sugar. When the blood sugar is low, these cells trigger the VMH to send a signal to the gustatory and related reflexes in the brain, nervous, endocrine, and digestive systems to prepare to consume adequate nourishment, bringing the blood sugar back to the required level.

The world men and women originally nourished themselves in provided foods that were not concentrated with refined carbohydrates, but rather a balanced mix of proteins, fats, fibers, micronutrients, and carbs.

When hunger motivated people to eat, the all natural whole foods released sugars, fats, and proteins, in a manner considerably different than the refined foods consumed today to. It raised blood sugar a moderate amount, and this can be seen by the low incidence of diabetes in prior centuries. These graphs reviewed together shows us clearly the impact of refined and high carb foods in our diets on the striking increased incidence of correlated diabetes. 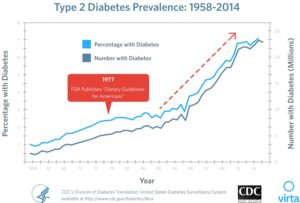 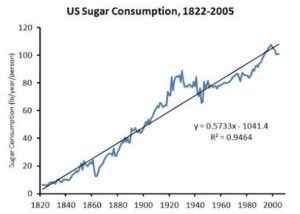 The increase in diabetes coincident with sugar consumption relates to the insulin response to the signal the VMH to eat food, not only sugar. As sugar has become the least expensive food, and the most rapidly released into our systems when the VMH sends a signal to consume food based on a low sugar level, we have tried to trick our body’s wisdom and have made a deadly mistake in superficially responding to the VMH signal. The deadly mistake goes like this:
1. VMH sends a signal to eat.
2. We drink an orange soda.
3. Our body thinks we just ate an entire orange tree, based on the rush of sugar into the body, brain, and VMH measurement.
4. That combined with the insulin response to the high blood sugar, further lowers the VMH sugar as the sudden rush is now followed by a sudden drop. And the cycle repeats itself. Binge drinking and eating of carbs results in a metabolic seesaw.

CardioBar®’s sugars are slowly released, and are metabolized over hours not minutes, resulting in a balanced rise to a normal level. Based on body size and activity, the sense of hunger is minimized and stays low for two to four hours if consumed alone is the common reported experience. This is ideal for any activity requiring a balanced, delicious food to see one through till their next full meal. As well, CardioBar® can be enjoyed as a healthy dessert functional food, which we will see next.

CardioBar®  is not intended to treat or prevent illness, nor is it presented as a replacement for medications. The Portfolio Diet has been clinically reviewed and suggested as an alternative option for people that have borderline risk factor cholesterol levels.  Because of this clinical review, CardioBar®  has been designed, formulated and created to contain all the natural ingredients contained in The Portfolio Diet. CardioBar®  is a unique functional food. The Portfolio Diet contained in CardioBar®  has been recommended as a safe alternative for anyone desiring to lower their cholesterol. Persons engaging in a self-care program should always seek the guidance and monitoring by their primary health care provider.