Nucleotides are molecules comprised of a sugar molecule, a phosphate unit, and a nitrogenous (nitrogen-containing) base. They are found everywhere within the cells of our bodies, including the nucleus and the cytoplasm.

Organism Number of chromosomes Below 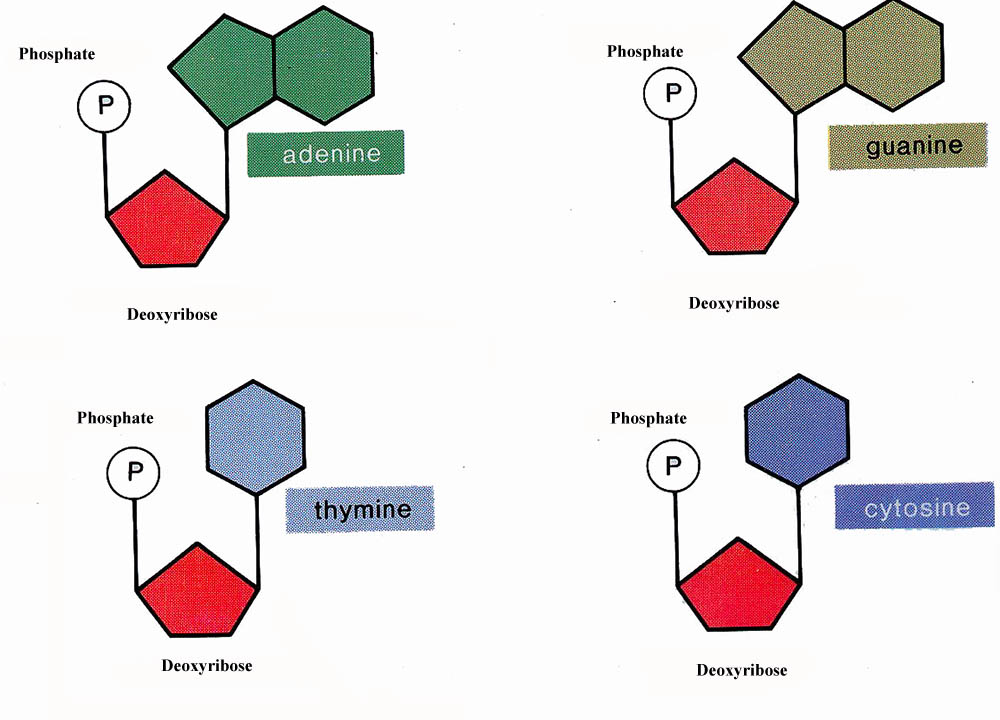 Each cell in our body contains a lot of DNA. In fact, if our cells were enlarged to the size of an aspirin pill, our DNA would be 10,000 meters long. This is equivalent to a 10 K run or the length of 109 football fields! The DNA is wrapped around specialized proteins, and this DNA-protein is tightly packed to form chromosomes.

Every cell in your body has two sets (one from Mom and one from Dad) of 23 chromosomes for a total of forty-six. Every living thing on the planet contains relatively the same DNA. It is the genetic material in all forms of life. This means that the DNA of all organisms, from bacteria to onions to gorillas, is made of molecules using the same kinds of instructions.

However, the number of chromosomes is quite different. So we have 1 trillion cells in our bodies with 46 chromosomes found in each nucleus. Each set of chromosomes contains 50,000 to 100,000 genes carried in 3 billion nucleotide pairs of DNA. So what are the genes? A gene consists of a specific sequence of nucleotides found on a strand of the DNA molecule. It is a segment of DNA that contains the information necessary for the creation of a sequence of amino acids essential for a specific enzyme or other protein. The sum total of the genes contained in an organism’s full set of chromosomes is termed the genome.   Some of these proteins are created through the action of only one gene. Other, more complicated, proteins are created using several genes.

A gene can be made up of only a few hundred nucleotide bases or it may require thousands of bases. In the 1980’s researchers learned that only 28% of human DNA is made up of genes and only 5% of the nucleotide bases found within these genes actually contain coding sequences for proteins.

In fact, humans have more non-coding DNA than any other species studied thus far. The non-coding DNA that makes up about 98% of the human genome was formerly known as junk DNA, since its functions had not been discovered. Recently investigators have discovered that some of this junk DNA found at the ends of the chromosomes, known as telomeres, is involved in cellular aging and controls the number of times that a cell can divide. Other non-coding segments of DNA have been found to switch on and off certain genes, and function as regulators influencing other different gene activity. There are some researchers who theorize that some of the junk DNA is deactivated genetic material from our earlier ancestors. Maybe one day we will find that it truly serves a purpose and really isn’t junk afterall.

RNA and Protein Synthesis Whereas DNA’s primary role is passing on exact genetic information through cell division, and providing templates for protein synthesis, RNA is concerned with protein synthesis only. I think most of us tend to think of muscles, ligaments, or tendon tissues when we think of proteins, but in reality they are much more than that. For example, hemoglobin, found in our red blood cells, is a protein that transports oxygen throughout our bodies.

Collagen is the most abundant protein in the body and is a component of all connective tissues in the body. Hormones are also proteins that are produced and released from glands. These proteins, or hormones, travel to specific sites and help to regulate all tissue and organ function. Other proteins include enzymes. Some enzymes are digestive and help break down foods into usable forms, while other metabolic enzymes function as chemical modulators and cause specific chemical reactions to take place, while increasing the rate at which these reactions occur.

All protein synthesis occurs in the cytoplasm of the cell within organelles called ribosomes. Remember that the DNA is found only in the nucleus. So how does this information get from the inside of the nucleus to the ribosomes found outside of the nucleus? This is accomplished by making copies of certain portions of the DNA that provide a template for specific amino acids and proteins. These copies, known as the messenger RNA (mRNA), are created using free-floating nucleotides found within the nucleus. The nucleotides are grouped in groups of three each or triplets. These triplets are also known as codons. The mRNA can travel through the nuclear membrane to the ribosome. The mRNA can be made up of anywhere from 5,000 to 200,000 nucleotides. The process of creating mRNA from DNA templates is called transcription.The final process, known as translation, is accomplished by a different type of RNA known as the transfer RNA (tRNA). Unlike mRNA, tRNA is located outside of the nucleus, in the cytoplasm, and carries information for only one amino acid. Once the mRNA reaches the ribosome, the tRNA, carrying three nucleotides specific for an amino acid, deposits these nucleotides on the corresponding codon. As the second tRNA deposits its group of nucleotides, it is bound with the first group to form chains of triplets to form amino acids. As the amino acids are bound together, polypeptides and longer-chained proteins are formed.

In the case of the amino acids tryptophan and methionine, only one mRNA codon is required for their creation. Other amino acids, like arginine, leucine, and serine require six mRNA codons. For example purposes, I’ve listed the essential amino acids and the base pair sequences required for their synthesis. The essential amino acids are those that can not be manufactured by our body and must be obtain from our diets. For fun, cover up the DNA triplet section and see if you can give the corresponding nucleotide. Remember that DNA uses thymine and RNA uses uracil.

Read The Journal Of Nutriton Article

What Are The Differences Between RNA and DNA?

Where Do Nucleotides Come From?